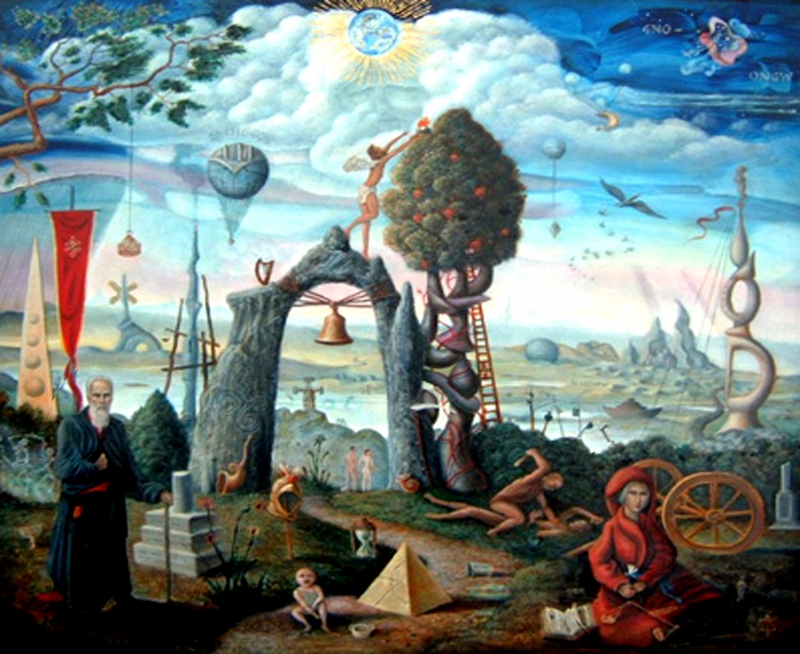 
O'Donoghue/Ross has an extensive library filled with books about artists, but believes most of them are written by critics who have little clue about the real intent of the artists and do not truly understand the techniques the artists employed to get the effects that they achieved. He scours references and sources of the artists' notes and understands their significance in ways that those who are not artists themselves are unable to adequately comprehend.

He is most impressed with the hand of the masters - Rembrandt, Van Gogh, Ryder, Turner, the late work of Monet, the Van Eyks, Picasso, Magritte, Ernst and many others including William Blake and his poetry, and writers such as Edgar Allen Poe, Herman Melville, Weston Le Barre, Loren Eisely, Shakespeare, Alexander Pope, Aristotle, and Alan Watts.

In addition, he is a devout Jungian in his own philosophical concerns and his oft times Dream Imagery reflects Jungian principles as well as Quantum discoveries. Clearly, he is as much a philosopher as he is a visual artist; and this preoccupation with the subconscious and ineluctable pursuits is the hallmark of his work.

His pieces often carry words and statements in the form of questions and conundrums, but always mysterious in the ways of his ancestors, who were, and are still, legendarily famous as the family of the hereditary Gaelic High Kings of Loch Lein who built and resided at Ross Castle on the ‘Great lake of Killarney’ until they were dispossessed as Rebels against Elizabeth I in the last stages of the Desmond Wars of the late 16th century.

This anciently noble family, legendarily wizards and alchemists, later became outlaws locked in a never ending struggle with the English settlement for control of Irish Sovereignty. These antecedents are a very important part of understanding the art of O'Donoghue/Ross, for he is ever elusive in his many varied styles and mediums and yet locked on the target of the ethereal, the ineffable, the indefinable and deepest of mysteries - the ultimate questions of ‘why are we here –and where are we going?'

To sum him up, he is always asking the question ‘Is this all for the moment, the immediate gratification of the right now and never again?’ or are his own Arch Druidic ancestors not right in assuming that there is more to life than the visible world. More than anything else, is there not something making all of this trial and effort of existence well worthwhile?

In short, he is the definitive optimist, for he believes whole-heartedly in ultimate justice and apotheosis.

Although he has worked in every visual medium at one time or another, O'Donoghue/Ross has painted all his life, and currently it is his main passion.  He has also experimented throughout the years with numerous media and has extensively studied the techniques of the old masters.

To view a video of The Long Gallery at the O'Donoghue/Ross residence, click here.